The SL-Class by Mercedes-Benz has always been the definitive luxury GT car. It has set itself as the benchmark for all other luxury two-seater roadsters since it’s first iteration in 1954 in coupe form only, as the 300SL Coupe. Since then, the car has evolved as the leader in technology and luxury for all other luxury roadsters that followed, especially from 1990 to the present. Though technology has changed during each generation of the SL-Class, the styling has remained mostly the same since the early 1990s model, the R129. However, for the 2013 model-year, Mercedes has made it’s most drastic styling changes to its SL-Class in the past 20 years, not to mention that they’ve added a variety of technological changes as well. Has Mercedes ruined a traditionally classic-looking car with unique styling and technology, or have the changes paid off for this heavyweight cruiser? Let’s find out.

If you’re in the market for a high-end luxury roadster, then styling is probably very important to you. The 2013 Mercedes SL550, at first glance, may seem a bit off, with those enormously bulbous headlights, upright grille, and dramatic side-skirts. These elements certainly threw me off initially when I saw the videos of the car last year filmed at the Detroit Auto Show. I thought the car had gone away from Mercedes’ traditional styling of the SL and gone for something that is trying to look like no other sports car on the road. They certainly have succeeded in this area. The 2013 SL550 has serious presence. Whether you love it or hate it, this car will not go un-noticed. Upon synthesizing this analogy, I realized that the new “bolder” styling was implemented because it helps Mercedes re-invent their standard-setter. I feel that this was a very smart move for Mercedes, as there is now a lot of new competition in the segment, like the F12 BMW 6-Series.

This car may look strange to people who have only seen pictures of it, but upon seeing it in person, this car looks really cool. A large part of this coolness is produced by the matte-grey paint job (a $1200 option), which helps onlookers better see the lines and width of the car. I spotted a metallic white example of this car in East Hampton town the other week and its’ lines were certainly not as noticeable. Matte-finishes truly do this car’s aggressively unique styling justice. I predict that most people will have a different view of the SL upon witnessing it in person. Instead of saying, “Damn, they ruined the SL,” people will say, “Wow, is that the new SL?” Personally I value cars that look different. For example, several automotive journalists credited the BMW Z4 as an “ugly” car. However, the unconventional creases and curves in that car’s body gave the car character. BMW in general has toned down the styling of most of their models tremendously in the past two to four years. Now, Mercedes seems to be doing just the opposite; making their cars more interesting than ever before.

Moreover, Mercedes has introduced several technological innovations to further place the SL ahead of its predecessors and indeed its competition. The primary technological advancement made in my opinion might actually seem very basic to most people; the SL550s’ chassis and body construction. Unlike ever before, both the body and chassis of the SL550 are 90% aluminum. It is 300 pounds lighter than the equivalent body and chassis combo from the 2011 model year. The car, in many ways, is more beautiful on the inside than the outside. Engine-wise, the SL550 has leaped forward. Gone is the naturally aspirated 5.5-liter V8 engine that has resided in various Benzes for the past 5 years. Now there is a 4.6-liter V8 with twin turbos that produces 429 horsepower and 519 pound-feet of torque. That is huge. 0 to 60 mph now takes just 4 seconds flat and the quarter mile comes in just 12.5 seconds at 114 mph. These numbers are not far off those of the new F13 BMW M6 convertible, which has 120 more horsepower than the SL550. Remarkable. Makes you wonder why anyone would need to step up to an AMG version of this car.

In addition to the engine and construction innovations of the SL550, there is now a standard windshield-washer fluid spray system that is integrated into the wipers, eliminating that annoying, blinding spray function typical of most modern cars. Also available is a new, photo chromatic sunroof build into the retractable hardtop. This technology was first seen in the ultra-luxurious Mercedes Maybach as early as 2003. Finally, it has trickled down into the SL550 as a $2500 option, though it does not open or tilt independent of the hardtop. Other accoutrements include an upgraded Bang and Olufsen stereo with 900 watts of total output with 12 speakers, a keyless entry system, active ventilated seats, rear view camera, and “AIRSCARF.” A device that blows hot air onto the occupants necks on cooler days.

Performance options are more scarce on the SL550 (Mercedes has to save some things for the AMG versions of the SL), but there is a special $4090 option called Active Body Control (ABC) that helps provide a sports car demeanor during hard cornering. Does it transform the SL into a sports car? No. However, the system does help this 4100-pound luxury cruiser corner like one. Mercedes advertises ABC as “the most advanced suspension in production.” It is comprised of a network of sensors hooked up to hydraulic shock absorbers that stiffen up in random configurations to counteract any imperfections transmitted from the road to the chassis. This technology does not only increase sportiness when driven hard in “SPORT” mode, but it also helps eliminate most vibrations transmitted into the cabin when in “COMFORT” mode. Both of these settings are selectable through a toggle switch located in the center console that comes with the ABC suspension. Very cool. 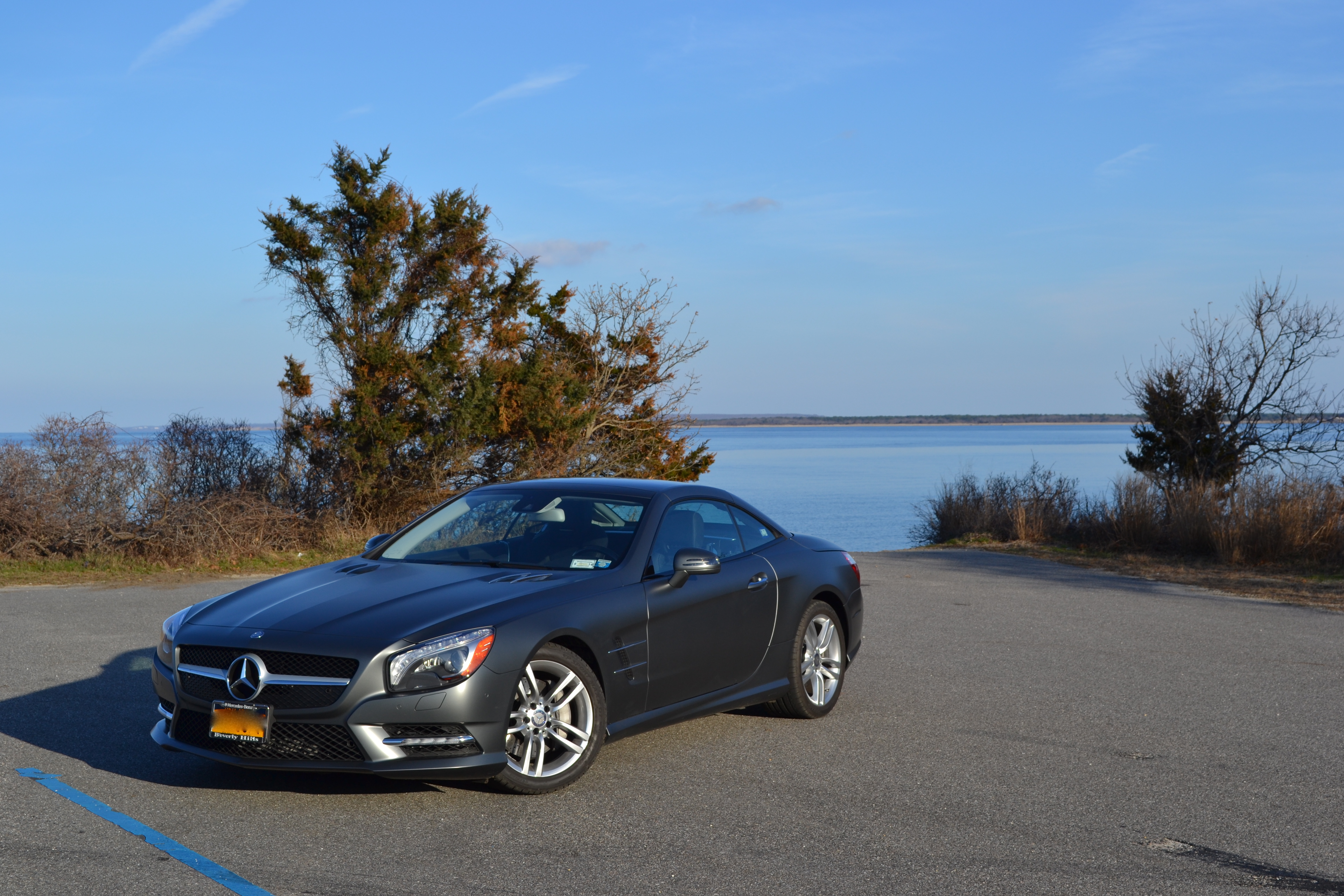 I believe that with all of these new and improved elements of the 2013 SL-Class, Mercedes will have reinvented the benchmark of the luxury roadster segment. The SL550 doesn’t do the job of a great sports car, it accomplishes something much more impressive than that. It is extremely comfortable, fast, and most of all luxurious. The SL550 is a car that will surprise you when you drive it. It looks like it will be very fast, and it is, but it is also very comfortable, and turns very well, and stops even better. I personally believe that the SL is the best roadster currently for sale. If the SL550 is what the “standard” car is, I can’t wait to drive the AMG versions.

Car enthusiast from, and lives in, THE HAMPTONS, New York. Located at the end of Long Island. Paradise from not only from a geographic perspective, but also from an automotive perspective, with a sheer abundance of exotic, cool cars. Some of the wealthiest people in the world journey out to THE HAMPTONS, on a regular basis in their awesome, and in some cases, ultra rare cars.